The first week I was in Juneau (April 2013), my buddy Michelle Sydeman invited me for a walk within Eagle Beach State Recreation Area. Showcasing a white sand beach, the recreation area offers seemingly forever views of the Chilkat Mountains, Inside Passage and the saltwater confluence of the Eagle and Herbert rivers. It was here I saw my first bald eagles in the wild, tumbling and twirling in flight, perching on gnarly driftwood and territorially bickering at one another.

I was mesmerized, and constantly vocalizing my awe when Michelle eventually quipped, “They’re just scavengers.”

I responded, “You realize that probably 95 percent of Americans will never see a bald eagle in the wild?” Having lived in Juneau for more than 20 years, I suspect it’s easy for her to take the spirited, white-headed, cocoa-colored eagle for granted. 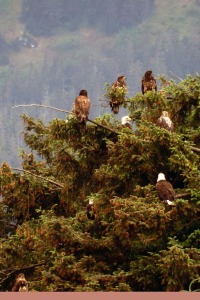 After six summers in Southeast Alaska, I am still enamored with bald eagles even though I see many every day. I have observed as many as a dozen eagles perched in a 200-foot-tall western hemlock, a lone sentinel perched on a streetlight along Egan Highway, a mated pair seemingly snuggling atop a power pole. I particularly enjoy watching eagles soar above the Gastineau Channel looking to snag fish that venture too close to the water’s surface.

Another dear friend and mentor, Scott Ranger, likes to say, “If you don’t see an eagle in Juneau, you didn’t get out of bed.”

According to the Alaska Department of Fish & Game, “bald eagles are more abundant in Alaska than anywhere else in the United States.” There are about 30,000 birds statewide, with the highest number of nesting pairs in Southeast Alaska.” Alaska’s largest bird of prey, a bald eagle’s wingspan can reach 7 feet (2.3m). They can weigh up to 14 pounds (5.4 kg) and live 35 years in the wild.

Not far from downtown Juneau, there is a creek where eagles flock in hordes, some perching in nearby trees, broadcast towers and light poles, others parked on a sandbar. I asked local raptor expert Stephen Lewis why so many raptors frequent the area, seemingly more so this year than last year.

“It is hard to quantify whether we are seeing more eagles this year because this area is pretty rich with eagles,” said Stephen, a wildlife biologist with the U.S. Fish and Wildlife Service, Juneau Field Office. “There is good nesting habitat in the area and lots of food available, including abundant salmon… and food scraps from the dump.”

Yes, folks, the bald eagle, the magnificent U.S. symbol of freedom is a dumpster diver. Like me, eagles prefer someone else do the hunting, the cooking, the cleaning. As Michelle said, “Just a scavenger.”

On the other hand, the eagle is also an apex predator, top of the food chain among Alaska wildlife.

“Long valued for their aesthetic beauty, eagles are now recognized for their biological importance as scavengers and predators in the natural environment. These raptors deserve our protection and respect.” – Alaska Wildlife Notebook Series, Alaska Department of Fish & Game.

Scavenger or not, I still love these majestic birds. Therefore, I was sad to learn from Stephen that many of the eagles frequenting the dump are also getting sick from eating our garbage food scraps. Stephen added, however, that measures are in place to deter all birds from foraging at the dump, including bulldozing trash under and using fireworks to scare birds away.

Up Close and Personal

If you live in, or visit, Juneau in the summer, you can get a bird’s eye view of an eagle housed within the Tram complex atop Mt. Roberts. An ambassador for the Juneau Raptor Center, Lady Baltimore is an adult eagle that was rescued after being shot in her beak and right wing. She also has a detached retina in her left eye. For these and other reasons, Lady Baltimore cannot survive in the wild; therefore, she has a forever home with the raptor center, spending her summers in her spacious digs on top of Mt. Roberts.

Didn’t See an Eagle in Juneau? You Didn’t Get Out of Bed