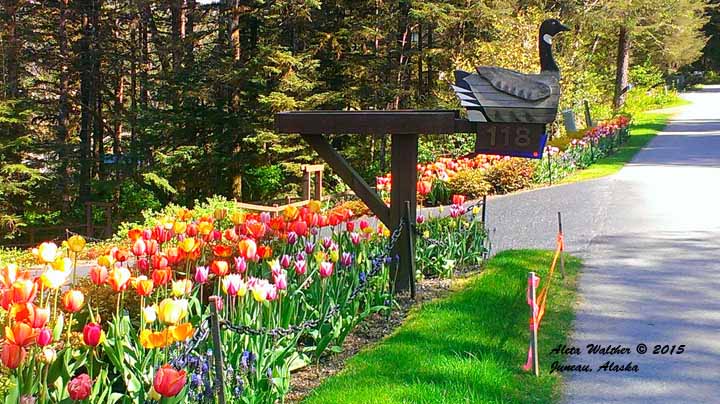 The springtime adage, “April showers bring May flowers” may be the case in the lower 48 states, but not so in Southeast Alaska where precipitation is perpetual and April temperatures range between 35 to 49 degrees fahrenheit (2 to 10 centigrade). May temps in Juneau historically range between, 42 and 57 degrees (6 and 14 centigrade). Therefore, I believe it is not rain, but sunshine, that triggers the spring eruption of wild flowers across the forest floor in late May. This year, however, due to a historically dry and warm spring, the flower power of Southeast Alaska sprang forth in early May, was in full bloom by May’s end and is still going strong in June.

According to a report from the National Oceanic and Atmospheric Administration(NOAA), May of 2015 was the driest May in recorded history across Southeast Alaska and one of the hottest months on record across the state. “The Alaska statewide average temperature for May was the warmest in 91-years of record keeping at 44.9°F, 7.1°F above average.” April 2015 also recorded above normal temps.

While not optimum for the health of Alaska’s temperate rainforest overall, wild and garden flowers, and me, reveled and thrived in the record-challenging weather.  Just see for yourself.

But before we begin, thank you to my Gastineau Guiding cohorts Scott Ranger and Annette Smith and Jeff Franks for allowing me to share their first class flower photography with you. 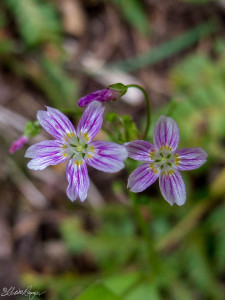 SIBERIAN MINER’S-LETTUCE
Photo and text by Scott Ranger © 2015
Location: East Glacier Trail, Mendenhall Recreation Area, Juneau
When the gold miners arrived from their sea journey to Alaska, many were beginning to suffer from scurvy. Those who came before told them to eat this plant and are responsible for its common name. Quite tasty and juicy, the abundant vitamin C staved off the symptoms of this nasty disease. 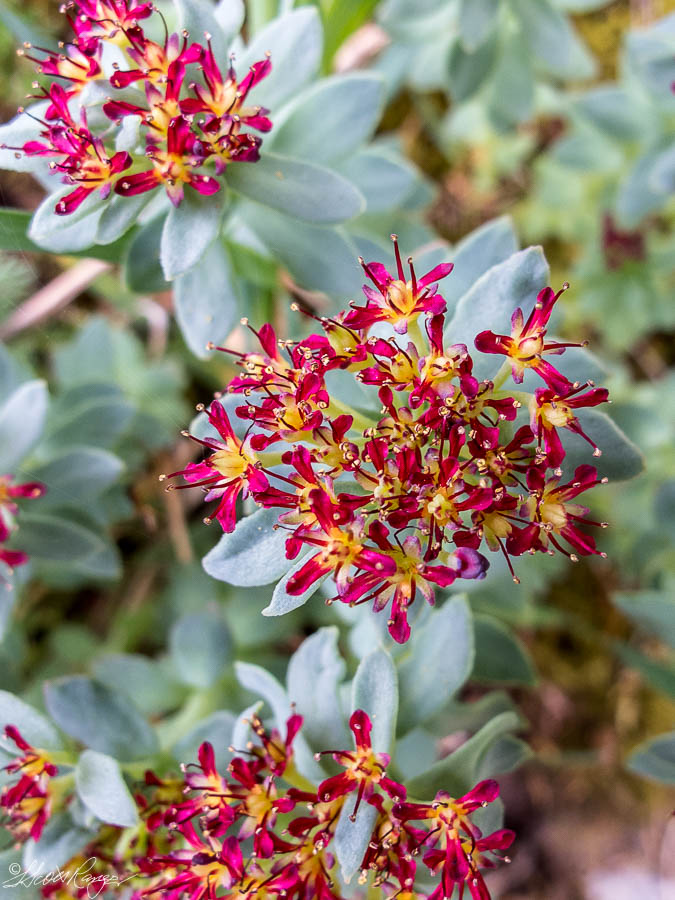 ROSE ROOT or STONE LEDGECROP
Photo and text by Scott Ranger © 2015
Location: East Glacier Trail, Mendenhall Recreation Area, Juneau
If the root is dug up (please don’t!) and crushed, it has the scent of roses and gives it the genus name which means “of roses”. 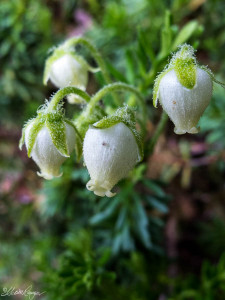 YELLOW MOUNTAIN HEATH,
YELLOW MOUNTAIN HEATHER, YELLOW HEATHER
Photo and text by Scott Ranger © 2015
Location: East Glacier Trail, Mendenhall Recreation Area, Juneau
When not flowering, most folks walk by this plant thinking it is a prostrate spruce tree as the creeping branches with needle-like leaves strongly resemble conifers. Their hanging urn shape give an instant resemblance to blueberries and they are in the same family. 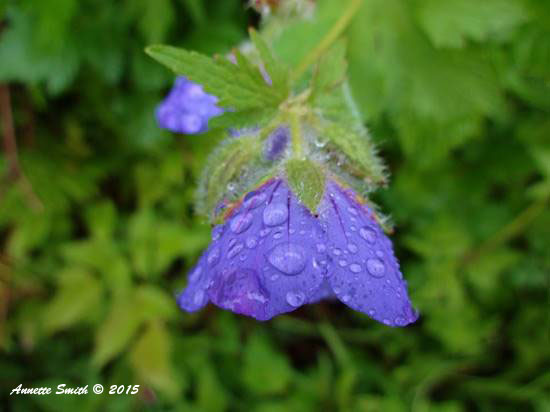 This perennial has several common names, but it is commonly referred to in Alaska as Northern Geranium.  It may be found  in meadows and open woodlands to moderate elevation in the mountains. 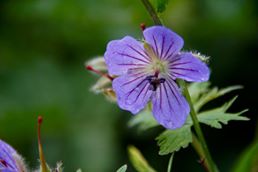 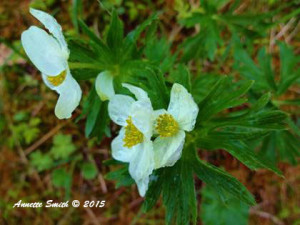 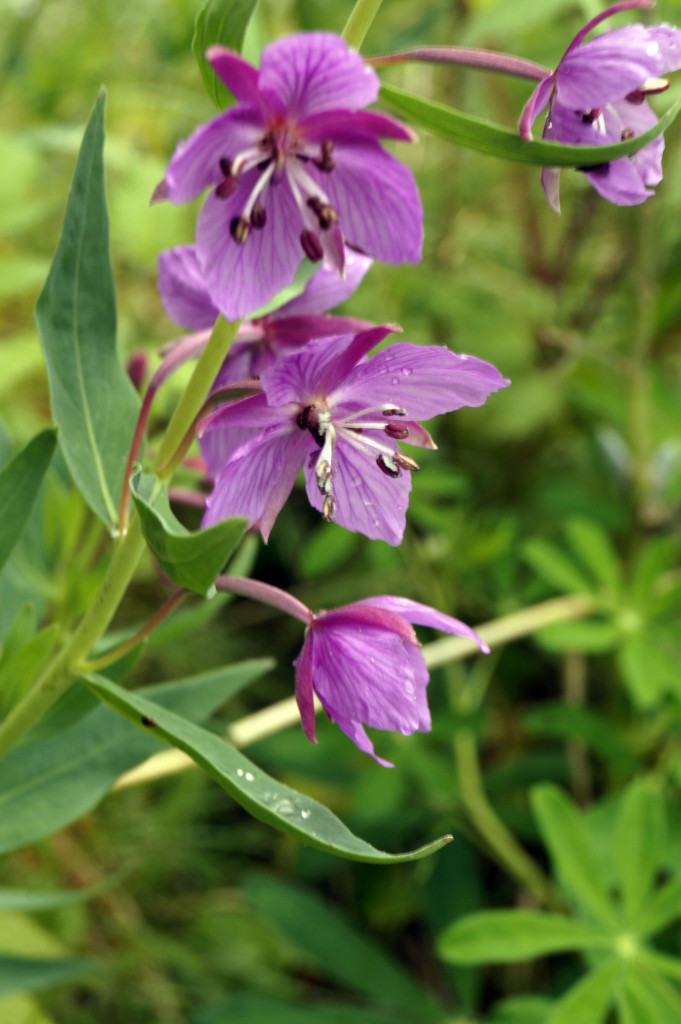 Photo and Text by Aleta Walther © 2015
Location: Mendenhall Recreation Area, Juneau
This abundant, showy native wild flower is a staple in many Alaskan  households and harvested annually as its flower buds make a flavorful jelly and its flower petals a tasty tea. We say in Alaska, “When the fireweed turns to cotton (spreads its seeds), summer is soon forgotten.” One can expect the first snow fall in 6 to 8 weeks. 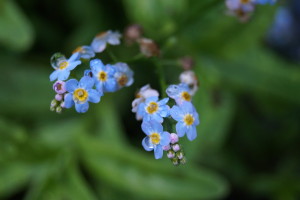 FORGET-ME-NOT
Photo and Text
by Aleta Walther © 2015
Location: Douglas Island, Juneau
Petite, but greatly appreciated, the forget-me-not species is the Alaska State Flower.  It grows well throughout Alaska and belongs to one of the few plant families that displays true-blue flowers. 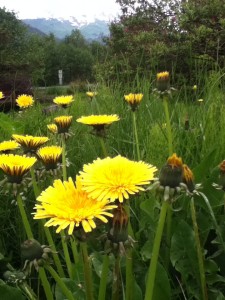 Photo and Text by Aleta Walther © 2015
Location: Douglas Island, Juneau
One gardener’s weed is another gardener’s flower. These showy “flowers” are the first abundant color to burst forth in early spring. All of this plant is edible and many Alaskan harvest dandelions for salads and the flowers for wine and jellies. Dandelion greens can be eaten raw, steamed, boiled, sautéed or braised 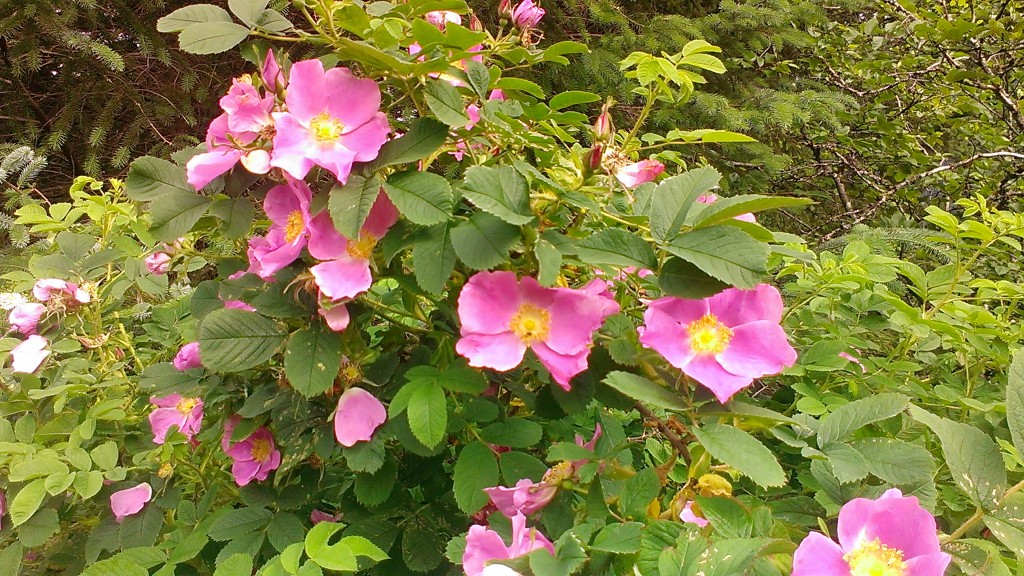 A favorite among local for being hardy, wild roses offer an abundance of showy flowers. According to local university scholars, cooks and gardeners, “Various parts of the plant are edible.. In spring, the shoot may be peeled and nibbled. In early summer, the petals… add a touch of color and flavor to salads, sandwich spreads and omelets. Petals may be steeped for tea or used to make jelly.  Candied rose hips may be used as a snack or in cookies, puddings and cake. 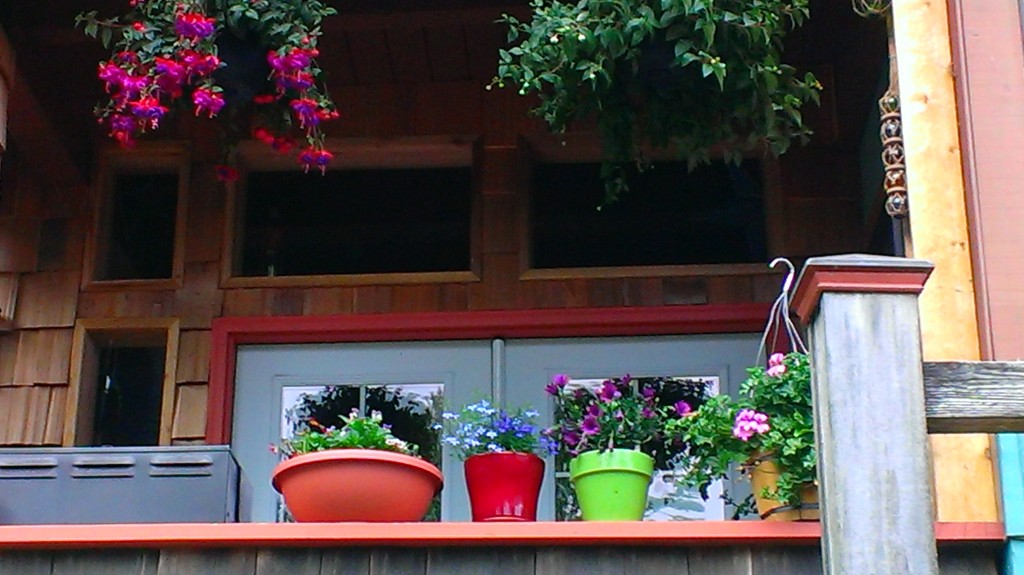 April Showers Bring May Flowers: NOT!