Southeast Alaska’s summer cruise ship season may be winding down for 2015, but the humpback whales’ bubblenet feeding behavior and acrobatic antics just keep going, going, going. Most of the breeching, pectoral flipper slapping, tail lobbing, peduncle slaps and spyhopping appear to be the antics of calves born earlier this year, as (and I am guessing) they have more energy and are not focused on feeding like the adults. They’re going to suckle whether Mom eats or not.

Adult humpbacks, however, because of their size, strength and tonnage, offer the most spectacular acrobatics with their thundering smacks and splashes. Don’t get me wrong, any slap, breech or spy hopping is an experience to behold. As I have said many times before, I feel fortunate when wildlife reveals itself to me, even when I don’t capture the moment with my camera.  Remember, as a naturalist, “I get paid in moments.” 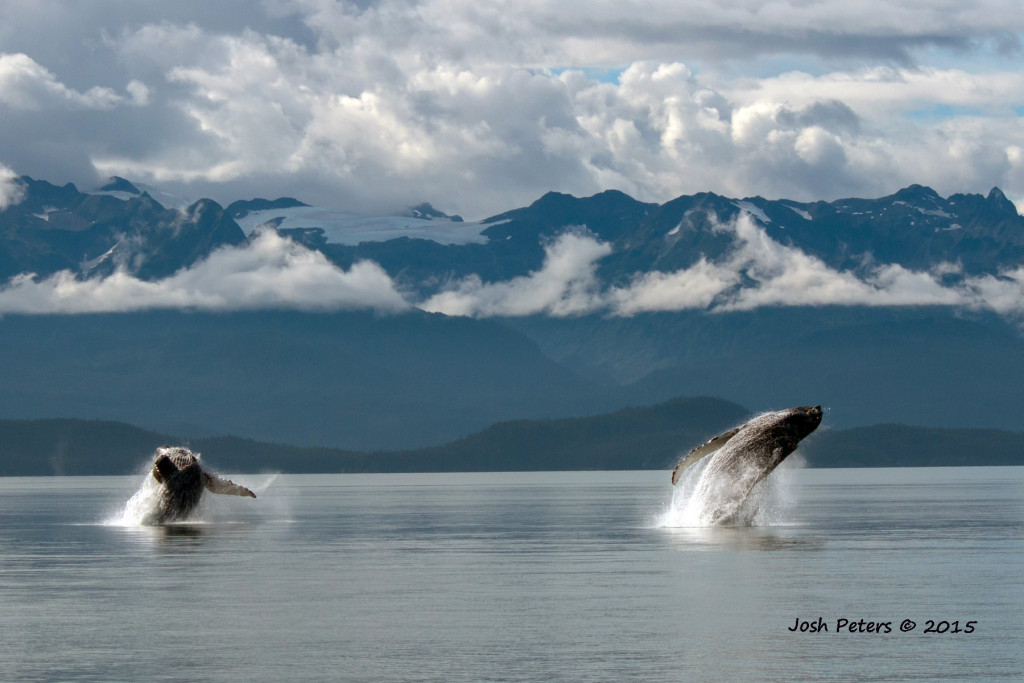 This appears to be a cow and calf breaching in unison.
I can imagine Mom saying , “Together now. One! Two! Three! Wheeeeeeeeeeee!

Researchers really don’t know why whales breech. As humans, we can only speculate. Perhaps it is a dominance behavior or a  form of communication between whales.  Are they looking around, saying hello, scratching an itch or attempting to dislodge barnacles and/or whale lice? I like to think they do it just for fun, to make a splash.

When I use “fun” to describe whale behavior, I am making an assumption, equating a human behavior to an animal behavior.  Merriam-Webster.com calls this association an anthropomorphism; “when human motivation, characteristics, or behavior are given to inanimate objects, animals, or natural phenomena”. In this case, whales.  I do it all the time.

Want to learn more about these whale behaviors? Check out the Alaska Department of Fish and Game’s Wildlife Viewing Guide.

If you are lucky enough to see a whale launch out of the water, chances are very, very, very, good it’s a humpback whale. Other whale species do breech, but seemingly not as often or with as much enthusiasm (again, anthropomorphism on my part). Look up breeching whales images and videos on the Internet and you will find that the majority are of humpback whales.

First, all whales have a peduncle muscle, the largest muscle in the animal kingdom. The peduncle is located at the whale’s flank and connects to the fluke (tail). This muscle provides the tremendous thrust adult whales need to launch their 30 to 4o ton bulk out of the water.  However, I believe the humpback whale’s unique pectoral fins give it the extra lift that crowns the humpback as the most acrobatic whale species.  It’s is the only species that has pectoral fins that are one-third its body length. These fins allow the humpback more maneuverability and thrust compared to other large whale species.

Spy hopping may be one behavior we, as humans, may have correct. Whales spy hop by balancing vertically, lifting their heads out of the water and using their pectoral fins to tread water  for balance.  I ocassionally see whales slowly spin around as if to be looking for my boat. Sometimes it is straight up and right back down, but I have  seen whales hold the pose for 10 to 15 seconds. Some accounts say whales can hold a spy hop pose for 30 seconds, but I have never seen a whale lift for that long.

On the other hand, National Geographic Education suggests whales may actually may be listening rather than watching when they spy hop. “Because the eyes of spy hopping cetaceans often remain underwater, some oceanographers think spy hopping may have more to do with a whale’s hearing than its vision. Close to the surface, … one can better hear the waves near the surf line, which mark its migration route.”

It’s mind-blowing to see and hear bubblenet feeding humpbacks barreling to the surface, their 15,000-gallon voluminous mouths and pouches gaping. For an untrained eye, this hunting technique is fast and over quickly if one does not see bubblenetters break the water’s surface.  Inevitably a few guests are looking the wrong way when the action explodes. Unfortunately, or fortunately, however, you look at it, they only catch a glimpse of the whales dipping below the surface. But, for experienced guides like myself and my Gastineau Guiding peers, there are two clues we watch and listen for that indicate bubblenetters will surface shortly.

First, as the picture above shows, gulls and eagles often hover above the whales, watching and waiting. When the  fish make their frenzied escape to the surface, they gulls dive for the surface, which tells me the netters will surface in seconds. Sometimes, however, the gulls are clueless. I have seen gulls go off in one direction only to have whales surface somewhere else or not at all.

Secondly, if the whales are close enough to the boat, you may hear and or feel them singing. Bubble netters work as a team with a matriarchal whale calling the shots. When she finds a school of herring, she swims under the fish and starts singing which panics the fish who swim to the surface to escape. The other whales swim around the startled fish and flash their pectoral fins which drives the fish into a tight bait ball. When its time, the matriarch changes her tune and they all launch to the surface to feast.

Want to hear the matriarch sing as she drives fish to the surface? Want to see her team gulping the fish and  gulls trying to snatch a snack? Click on the green text below to link to video I captured last year. When you click on the link, another link will appear and follow that link to the video.

Whales bubblenet feeding next to boat 7-29-14

Lastly, thanks to Scott Ranger, Annette Smith, Theresa Soley and Josh Peters for allowing me to share their photos in this post.