Visitors must be patient if they want to see wildlife in Juneau in the summer. On multi-ship days, with thousands of people in town, most wildlife high-tail deep into the forests or high up the mountain of the Tongass National Forest. That said, in July, one is guaranteed to see whales if they take a whale watching excursion, at least my company, Gastineau Guiding, guarantees humpback whale sightings.

I am also confident most visitors will spot bald eagles and ravens around downtown Juneau. Eagles regularly roost in the spruce and hemlock trees located  across the street across from the cruise ship docks. The trees, and some of the harbor buildings, make ideal perches for scanning the Gastineau Channel for fish.  Known by Native Alaskans as  “The Trickster,” the raven is opportunistic, begging for handouts or picking through trash cans. Bigger than most chicken species, ravens are brainy, cagey and bold and often sit on parked cars gawking at visitors walking past. The visitors  gawk back.  There are also black bears, Sitka deer, hoary marmots and porcupines around, but you have to get out of downtown to catch a glimps of  these characters. The following photos and videos captures some of the furry or feathered residents of Juneau. All pictures were taken on Gastineau Guiding excursions. 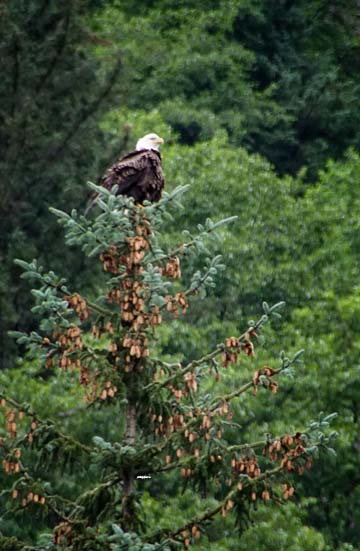 My friend and naturalist mentor Scott Ranger likes to say, “If you don’t see an eagle in Juneau, you didn’t get out of bed.” Sooooo true. I had not been in Juneau a week when a friend invited me to go for a walk at Eagle Beach. Rightfully named, I saw dozens of eagles in the air, in the trees and on the beach. As I yipped and howled in exhilaration of seeing my first bald eagle in the wild, my friend, weary of my babbling, attempted to dim my zeal by saying, “it’s just an  eagle a, scavenger!”  It didn’t work. I countered, “Do you know how many Americans will never see a bald eagle in the wild?” I get out of bed each day, see dozens of eagles each day and still yip and howl in awe of these majestic birds.

I often see this little guy in the lush vegetation just above the Father Brown Cross on Mount Roberts when leading the Town, Tram & Timberline Trek adventure. I believe the marmott enjoys the attention it gets from my hiking guests. In this instance, the furry fellow was more focused on nibbling on alpine greens than the half dozen or so cameras clicking away.  But like any celebrity, enough is enough. 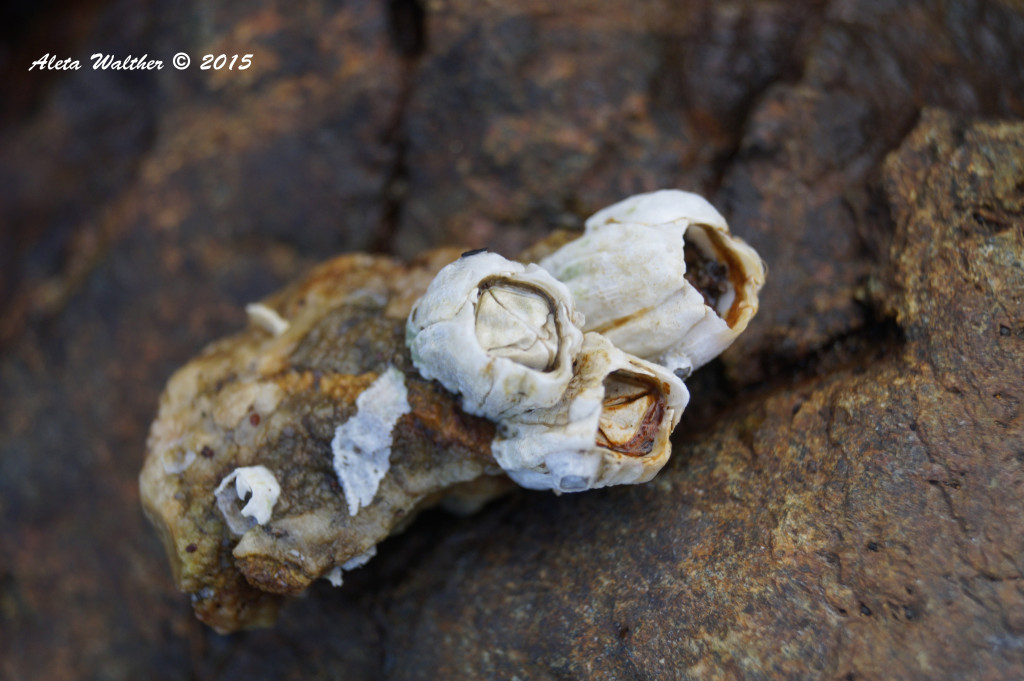 Yes, this is a living, breathing sea creature, a crustacean, a resident of the intertidal zone of Alaska’s waterways. We see them every day on every North Douglas  Island (Alaska’s Whales, Glacier’s & Rainforest Trail) excursion. Barnacles are every where; attaching themselves to rocks, driftwood, pier pilings, beach trash and boat hulls if not maintained. FACT: Because barnacles are stationary, can’t leave their shell, can’t go find a mate, barnacles must mate with a neighbor. They are hermaphrodites (have both male and female sex organs) and have a strong stretchable penis. After the mating season, the penis is discarded with a new one growing in time for the next mating season. OK, it’s more information that you probably wanted to know… . 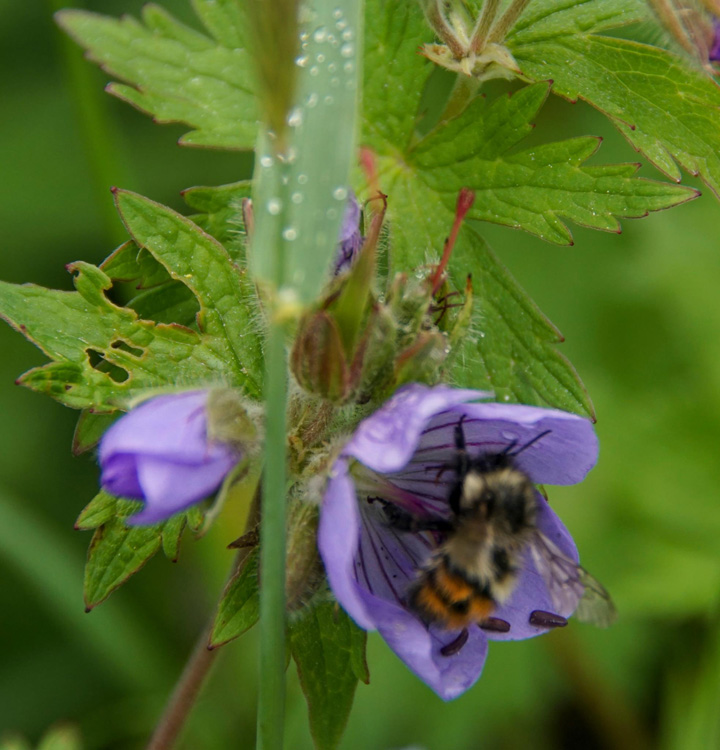 “She (Artic bumble bee) is the queen of beasts among the tundra flowers. Big and hairy and social by nature, the Arctic bumblebee e is exquisitely adapted to life in the northern latitudes—where life in turn is often exquisitely adapted to this bushy brightly-colored bee.” — Alaska Department of Fish and Game species profile. The bee was enjoying this mountain geranium laced among the rainbow of wildflowers in a quaint meadow just above the Mountain House of the Mount Roberts Tramway during a recent Town, Tram & Timberline Trek.

This bouy at Gibby Rock is a popular place for young sea lions to haul out of the ocean to rest. While these sea lions look sound asleep, they are ever watchful for other sea lions looking to displace them. There is never enough room at the inn, and their “king-of-the-hill” antics delight guests on our Alaska Whales, Glaciers and Rainforest Trails excursions. 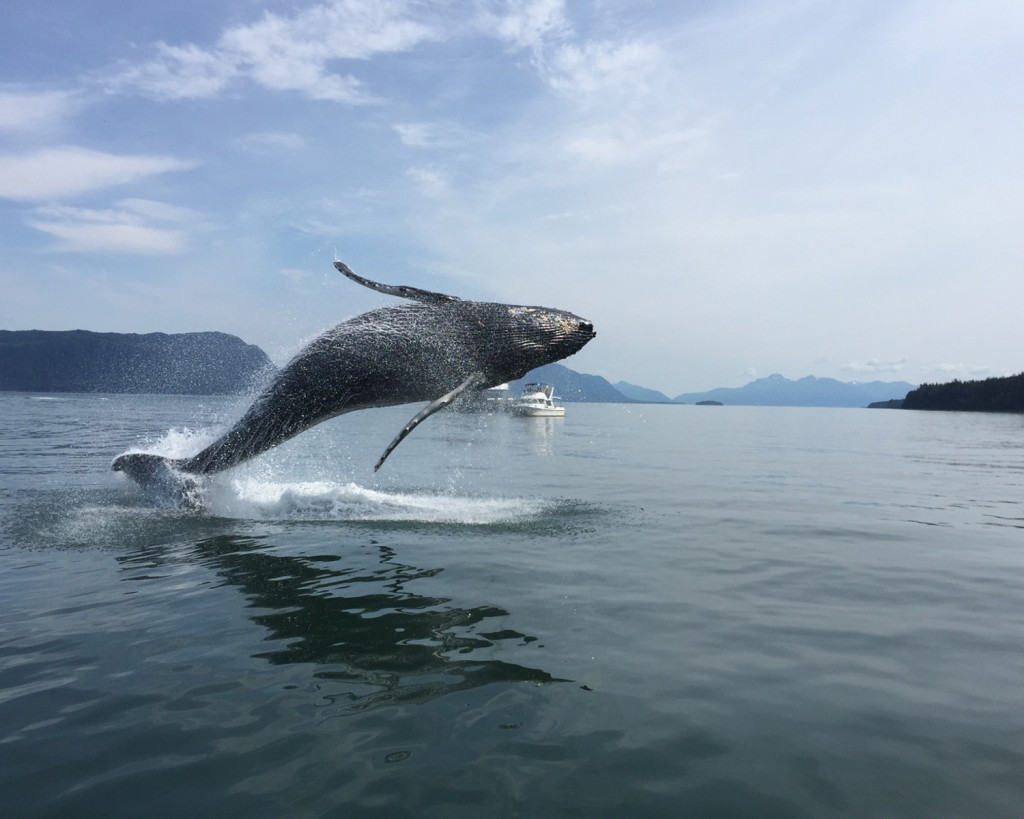 Guests often ask if we are going to see breeching whales on our Discover Alaska Whales or Alaska Whales, Glaciers and Rainforest  excursions. Not likely.  Witnessing a 40-ton whale heave itself out of the water is a rare behavior. Admittedly, I have seen more whale breaches this year than previous seasons.  I believe it’s because there are have more calves in the waters around Juneau this year, and the later in the summer, the more calves seem to breech. It also seems to me as calves  get older, they get stronger, more athletic and maybe more curious to see what is going on around them. Researchers really do not know why whales breach, but speculate it could be for a number of reasons: to show dominance, a means of communications, to knock of barnacles, being startled, or perhaps, just for fun.  Whatever the reason, my guests have fun when whales reveal themselves through breeching. 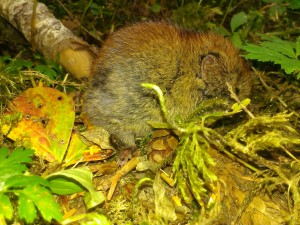 I suspect most of you are more intrigued by the breeching calf, the stately eagle or the furry marmot, but I am delighted this northern red-backed vole stayed long enough for me to snap this photo.  I see voles on the trails often, but only as a scurrying blur of fur.  Voles are rodents that have fuzzy coats, beady eyes and short tails.  Red-backed voles live in forested habitats that provide a more “catholic diet” according to the Alaska Department of Fish and Game’s red-backed vole specie’s profile. What “catholic diet” means, I have no clue except that the profile goes on to say ” red-backed voles are omnivorous and will eat grass, seeds, fruit, lichens, fungi, insects and meat. If a vole is caught in a trap, others will feed upon the trapped vole.” Ewwwww!  This cute character is nibbling on red stem moss. 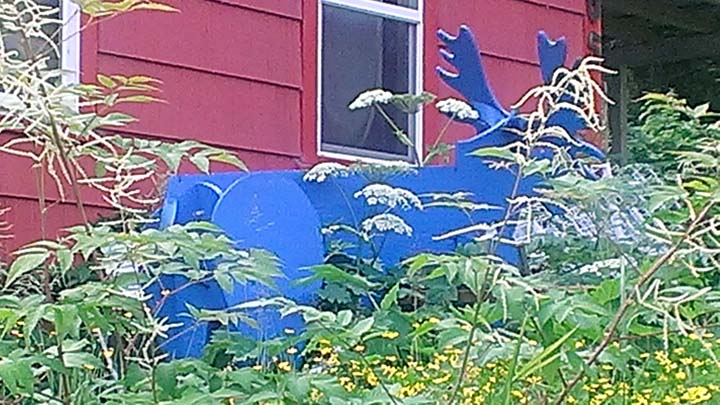 This is the only moose you will see in the Juneau area.  A deer species, moose are found in limited areas of Southeast Alaska because there is not food for a moose to munch for lunch.  Moose feed on willow, birch, and aspen leaves and twigs, sedges, pond weeds and grasses.  There are no native aspen or birch trees and few willow in coastal Southeast Alaska. Because most of the land in Southeast Alaska is dominated by mountains marching down to the sea, there are few meadows or ponds for nibbling on grasses and weeds.  The temperate rain forest is also very dense making it difficult for a 1,500 pound bull with a six-foot rack to travel. I hear there are moose populations on some of the island just outside of Juneau, and that occasionally a moose will swim  over to the outskirts of Juneau, but I have never seen any.

While you are at it, enjoy this You Tube video of two moose calves playing in a sprinkler. My cute gift to you.