“I called NOAA and reported it,” Annette said. ” Don’t know what, if  anything they did, or can do. That’s a heck of a neck wound on this guy.” 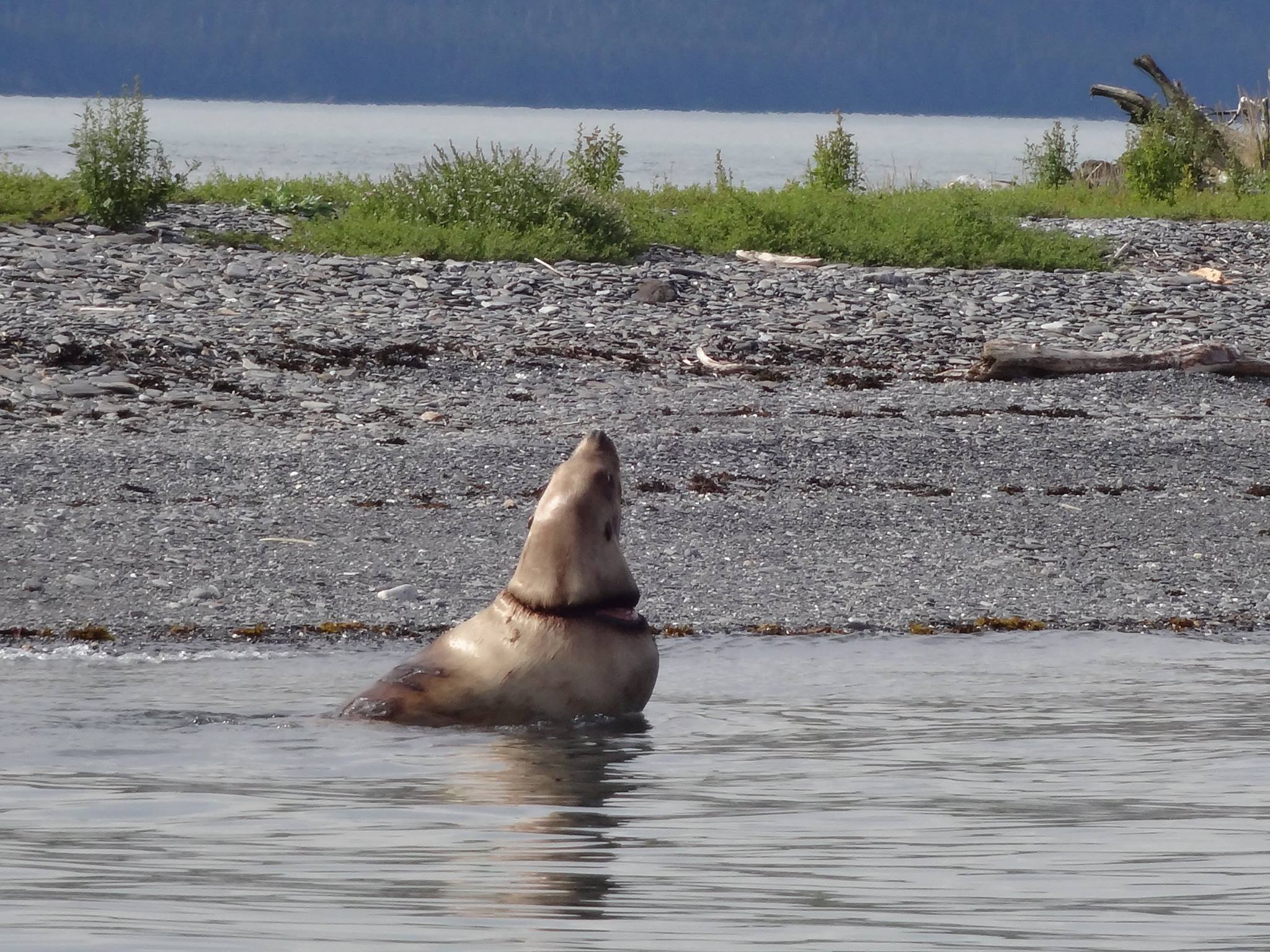 It looks to me like it may have got entangled in a fishing line or box banding, two very common sources of neck entanglements. The National Oceanic and Atmospheric Administration (NOAA) has a fisheries division that operates the Alaska Stranded Marine Mammal Network that is tasked with researching and rescuing  injured, entangled or dead whales, seals and sea lions. Quite often, individuals like Captain Annette notify the Network staff of creatures in distress, dying or dead.

The NOAA website states that most stranded animals are found dead, but some strand alive. Whales, orcas, sea lions, seals, otters, birds and even sharks get entangled in nets, monofilament fishing line and other marine debris/trash. NOAA has a website page that specifically addresses seal and sea lion entanglement and ways to reduce entanglement incidents. According to the NOAA Fisheries  website, many seals and sea lions in Alaska unnecessarily suffer or die after ingesting fishing gear or getting caught in marine debris.  The key is not rescuing entangled marine life, but to prevent entanglements in the first place by reducing marine debris.

“In a limited number of cases, it is possible to transport individuals to regional rehabilitation centers, with the objective of returning them to the wild,” the Network’s website states. “Marine debris adversely impacts at least 260 marine species, including marine mammals, sea turtles and sea birds. Marine debris is any man-made object discarded, disposed or, or abandoned that enters the marine environment.”

Sadly, not much can be done to help entangled adult seas lions. There is no easy, efficient, humane or safe method to capture adults or sub-adult sea lions. Injured sea lions can be aggressive, and with weights around half a ton, capturing a male sea lion is dangerous undertaking for rescuers and the sea lion. So why don’t rescuers just sedate sea lions using a dart gun? A fearful or agitated sea lion will likely head to the safety of the ocean where it will drown once the sedative kicks in.  According to a video produced by the Alaska Department of Fish  and Game, rescuers are exploring the use of a net gun to capture injured or entangled sea lions. SEE VIDEO BELOW.

As captain of a whale watching vessel and an avid fisherman, Annette spends countless hours on the water observing wildlife. She captured this photo of a Steller sea lion with a salmon flasher  hanging from its mouth. There is a hook at the end of the flasher. “Sometimes sea lions play a dangerous game,” Annette said.  “They take a hooked salmon off a fisherman’s gear.  Sometimes they are successful and they get the fish, sometimes, they fail and they get the gear.  This one lost his gamble!”

When an injured sea lion or seal is rehabilitated, it is often branded so researcher can monitor the mammal’s recovery, habits, migration and health. I often see branded sea lions resting on Little and Benjamin islands.  NOAA Fisheries’ Protected Resources Division page, Pinniped Branding on the West Coast states that “brands  provide a permanent marking that allows scientists to gather information over a long period of time from known individuals in a population. Branded animals can be easily observed from a distance without disturbing them or other animals around them, and because the marks are permanent the animals can be followed throughout their entire life.”

Alaska’s Steller sea lions were listed as endangered in 1990 because of a dramatic decline in their overall population. Subsequently, the population was split into two distinct stocks, Western and Eastern stocks. Today, the Western Stock is still listed as endangered while the Eastern Stock, Southeast Alaska’s sea lions, were delisted in 2013. Although no longer endangered under the Endangered Species Act, Steller sea lions are still protected under the Marine Mammals Act.

I am hoping the Steller sea lion remains protected . I never tire of seeing them fishing for herring alongside humpback whales, jostling for a dry spot on a buoy, or battling for king of the harem status during mating season.