I am one-step closer to being an “Alaskan Babe in the Woods,” the ultimate frontier woman: hunter, gatherer, gardener, angler, carpenter, mechanic and of course, the perfect wife and mother. NOT! 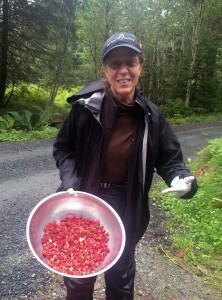 My good buddy, Annette Smith, and I recently spent several hours crawling around a scenic, but  soggy meadow  gathering nagoonberries. Nagoonberries resemble a raspberry growing on a strawberry plant. To me, they taste like a tart raspberry. They are  high in vitamin C, just the justification I needed to scarf down about as many as I brought home. A long-time Juneau resident, Annette will make jam and marinades from the berries this winter when Juneau’s days are short and dark.

Annette is a true Babe of the Woods. She hunts, fishes and gathers “wild” vegetation for subsistence . Her two freezers are well stocked and she has cases of canned jellies, jams, ketchup and marinades. Subsistence is defined by federal law as “the customary and traditional uses by rural Alaskan residents of wild renewable resources for direct personal or family consumption as food, shelter, fuel, tools, or transportation… .”

After  two hours crawling about in the drizzle and wet vegetation, I was soaked. Despite an attack by a swarm of no-see-ums, aka “biting jaws,” it was an adventure. And, I have the  facial welts to prove it.

Berry picking season is highly anticipated by many Alaskans

Bears love nagoonberries and since we were scavenging in a remote area, Annette suggested I sing to let the bears know of my presence. Nagoonberries grow low to the ground among the sedge grasses, ferns, wild irises, dwarf dogwood, mosses and lichens. Scurrying about on hands and knees, hidden by tall vegetation, it is easy to accidentally sneak up on a bear intent on eating sweet treats.

We didn’t see any bears. Darn! But, we saw evidence of bears, including bear scat, which I scooted into twice. EUUUU!  After my second contact, I quit scooting and began crawling  instead (I was wearing rubber gloves and rain pants).

In Alaska, Mother Nature provides a bounty of organic foods if you know where to look. That said, I had no idea nagoonberries existed much less where to look for them. Alaskan berry gatherers, including Annette, are very protective of their berry caches. Nagoonberry patches are not found in sizable quantities, and are soft and easily crushed. I will say, Annette’s prodigious and productive cache is “out the road,” but she threatened me with death by no-see-ums if I divulge any further clues to the location of her secret beach meadow.

For protein, she as a cache of frozen and smoked venison (deer), halibut, rockfish, red snapper and king, coho, and sockeye salmon. A sharp shooter, she has sustenance hunted for musk ox, moose, elk, bear, mountain goat, dall sheep, grouse and a variety of waterfowl.

Bring berry juice and sugar to a boil. Add spices, simmer for about 15 minutes. Add white grape or apple juice and simmer for 5 minutes. Serve warm with  orange slices. As a  punch, use equal amounts of juice and ginger ale or lemonade-lime soda. May also be served frozen as a sorbet

Babe of the Woods

3 thoughts on “Babe of the Woods”