Growing up in the Midwest, I fancifully imagined mushrooms pirouetting in the moonlight in their umbrella-shaped caps; toadstools for fairies and butterflies to light upon. Once I outgrew my childhood daydreams, mushrooms no longer intrigued me. I found them rather unremarkable, a lawn nuisance and only good for eating. That is until I moved to Juneau for the summer, started hiking the trails of the Mendenhall Recreation Area within the Tongass National Forest. Did you know there are tens of thousands of mushroom sprouting fungi (singular: fungus) species worldwide? Did you know that some are not only edible, but also medicinal and psychedelic? Did you know that the native people of Southeast Alaska use mushroom juice as pigments for natural fibers? And, did you know there would be no Tongass National Forest without the fungi and their spore-producing mushrooms? Who knew?

Mushrooms play a vital role in the life cycle of a forest. For example, mushrooms feed upon decaying matter, such as dead trees, and helps complete their decay so that they turn into new soil, nutrients for new life to take root and grow. Mushrooms are also an important food source for forest creatures, including squirrels, rabbits, bears and voles. Did I mention they are also popular with photographers and hikers?

According to the U.S. Forest Service, there are 5,000+ different mushroom-sprouting fungi growing throughout the Pacific Northwest, many found bursting forth in August and September along the recreational trails of Southeast Alaska. Their diversity is astonishing. Red, rust, gold, grey, black, blue, cinnamon, white, purple, pink. Some are multi-colored and speckled. Some are small, some are tall, some are fuzzy, some are slimy. Some are beguiling, some look as though they come from the Elven Enclave of Rivendell within J. R. R. Tolkien’s fictional Middle Earth.

Fungi species are so numerous that many are still “undescribed” and unnamed. A U.S. Forest Service pamphlet, Mushrooms of the National Forest of Alaska, states, “only 15 to 40 percent of North American mushroom producing fungi have been described.” That said, some do have common names that are fun or fanciful:

Because of their overwhelming diversity, it is difficult to tell edible mushrooms from inedible mushrooms or from toxic toadstools. Therefore, I let my grocery store’s produce manager make that decision for me.

Knowing what I know now, I still love mushrooms on my cheeseburgers. I just have a different perspective and greater respect for them, mesmerized by their petite poses along forest trails. In fact, mushrooms often dwarf the giant cone-bearing conifers when it comes to capturing hikers’ attention. 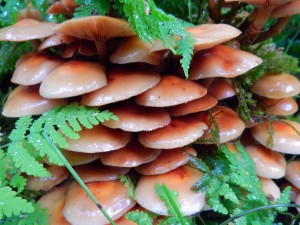 To learn more about the mushrooms, the fungus among us, check out these resources:

One thought on “Mushroom Eruption in the Tongass National Forest”